Sign up for our Newsletter
You are here: Home / Events / MINI FESTIVAL #EU4Balkans 2022
Back to all events 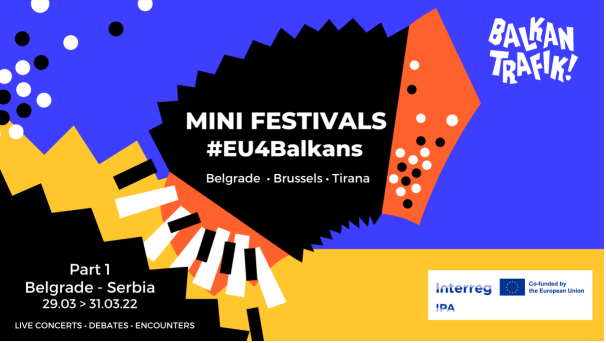 MINI FESTIVAL #EU4Balkans is being held on 29-31 March 2022 in Belgrade, Serbia, but is organised in a hybrid form - in order to really be accessible to everyone!

EU4Balkans is part of the cooperation organized by the European Commission and 1001 valise, the organisers of the Balkan Trafik festival, to raise visibility about the regional cooperation under Interreg IPA cooperation between EU Member States and countries of the Western Balkans.

The EU4Balkans events aim to raise visibility on the rationale of Interreg IPA cooperation under Cohesion Policy and the EU Enlargement Policy with all its positive impacts. Especially culture will serve as a driver for tolerance, mutual understanding and removing psychological borders towards what connects the border regions. In this perspective, common values like inclusion, solidarity, multilateralism and global partnership will be embodied, to help the audience to overcome the often-wrong preconceptions of the Western Balkans. Young people will further enrich the events as change-makers of politics towards a fairer, more inclusive and sustainable society.

The 3-day festival is composed of a debate with Young European Ambassadors on Women Empowerment, a political reception with Belgium Ambassador Koen Adam, and Mr Ruben Van Opstaele, First Secretary for Political Affairs at the Belgian Embassy, several cultural sessions such as the Balkan Jazzovic and a meeting with Goran Bregovic.

Take a look at the EU4Balkans programme!

Should you have any queries, require any special assistance or wish to register for the Balkan Jazzovic concert or the reception at the Belgium Embassy, you can do so by contacting amandine@balkantrafik.com with Nadine.Lakhal@ec.europa.eu in copy.