Honorary ambassadors of macro-regional strategy named with the Windmills of Excellence - The best high school and university students from the region awarded for innovative entrepreneurial ideas - Environmental quality, sustainable tourism and blue growth are at the center of thematic discussions. - Albania will continue the good practice of the Slovene Presidency.

After the ministers adopted the Izola Declaration yesterday and with it the new, tenth member, the Republic of San Marino, the participants were first greeted by Izola Mayor Danilo Markočič, and the 6th EUSAIR Forum was officially opened by Slovene Ministers Anže Logar and Zvone Černač and the European Commissioner for Reform and Cohesion, Elisa Ferreira. The Commissioner emphasized that “citizens in EUSAIR countries are not only sharing the sea, but also sharing the future.«

It was through dialogue on the conditions of a shared future that the participants of the Ministerial Round Table were inspired by a co-recipient of the Nobel Peace Prize and leading Slovenian expert on climate change, Lučka Kajfež Bogataj, and the EU Climate Pact Ambassador and journalist of the Delo newspaper, Boštjan Videmšek. They praised young people for their bold thinking, emphasized the need for change of individual life-styles and called for new institutions that will be able to cope with contemporary challenges.

The Young POPRI competition was aimed at finding the most innovative entrepreneurial ideas among young people, organized by Primorski tehnološki park among high school and university students from all nine countries in the region. The best and the most creative ideas were awarded at today's closing ceremony of the 6th Forum. 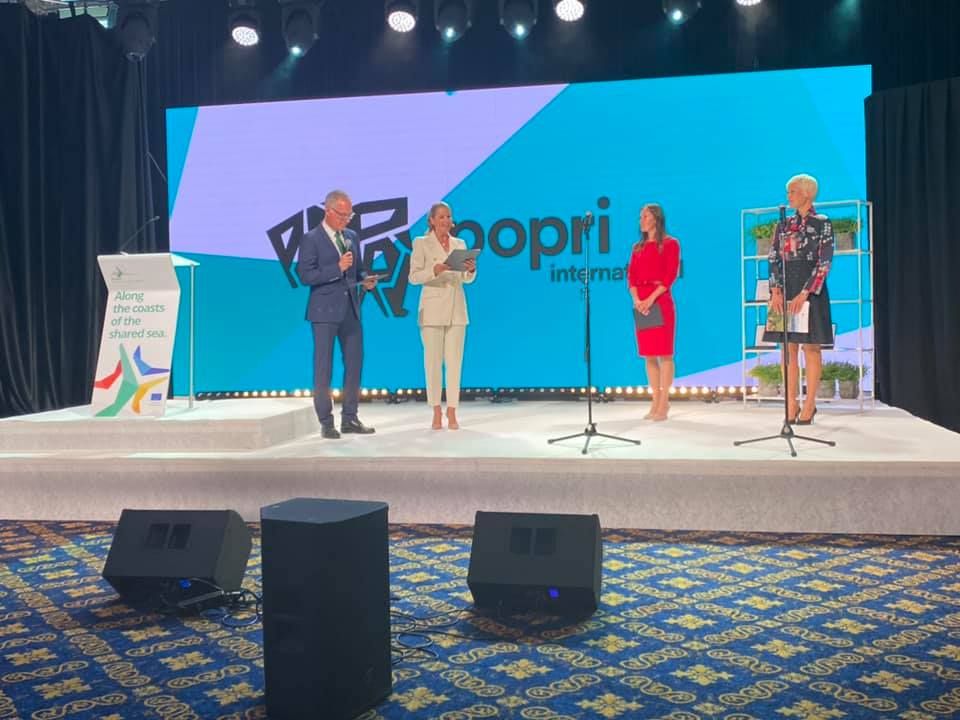 The winners of both categories will participate in a 14-day online seminar hosted by the California-based M Accelerator. The winning teams are VISUS among high school students and Magnet Strap Winder among university students, both from Slovenia. The PODIM Start Up conference in Maribor will be attended by the second and third place teams: Leaflife from Italy and VAH from Serbia in the high school students category and Voćaka from Montenegro and Eklinika from Bosnia and Herzegovina in the University students category.

The director of Primorski tehnološki park, Tanja Kožuh, said: “From Slovenia alone, 134 teams participated in the competition, with a total of 344 competitors, 58 mentors and 62 organizations. Multiply these figures by the other eight EUSAIR countries and you get amazing numbers!”

A special recognition for the most creative "borderless idea" was given by the representatives of Nova Gorica  and Gorizia as European Capital of Culture 2025. It was received by members of the Bioneers team from North Macedonia.

Young people have been identified in many discussions of the 6th EUSAIR Forum as the major victims of the Covid-19 epidemic and climate crisis, so it is all the more valuable that Albanian Foreign Minister Olta Xhacka emphasized that they will continue the good practice of the Slovene Presidency, which focused specifically on young people.

While Young POPRI was looking for ideas among the youngest, the most experienced and deserving for spreading the idea to other areas of public life and public good were rewarded with Windmills of Excellence and the honorary title of ambassadors of macro-regional strategy. Windmills of Excellence were awarded to: Mirjana Čagalj from Croatia, George Alexakis from Greece, Rosella Rusca from Italy, Milena Krasić from Montenegro and Bojana Cipot and Emilija Kastelic from Slovenia. 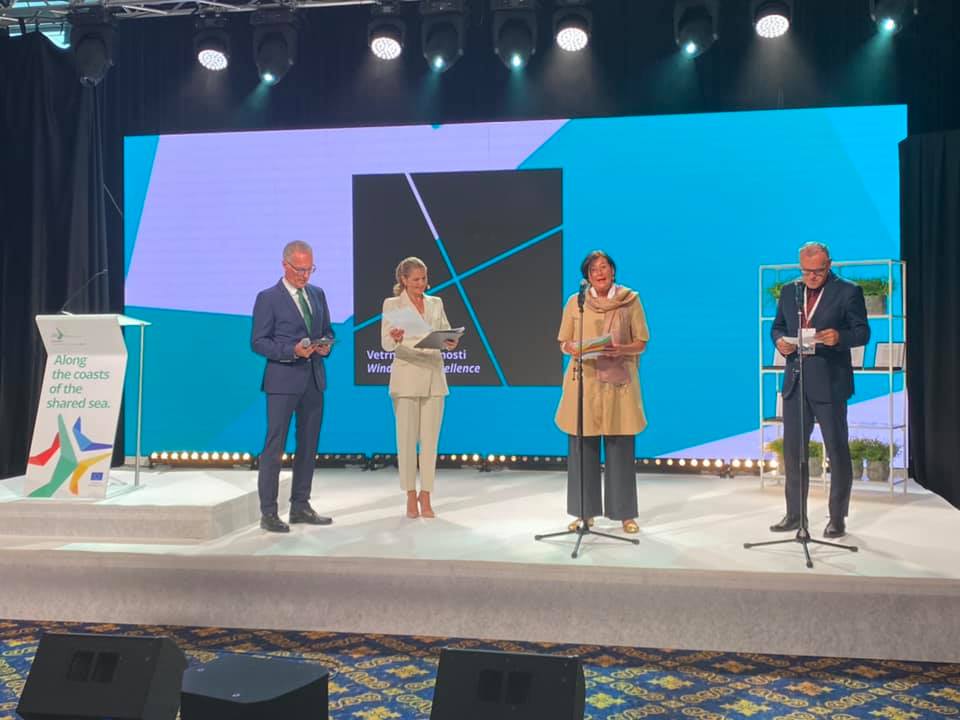 Andreja Jerina, national coordinator of macro-regional strategies at the Slovene Ministry of Foreign Affairs, the initiator of this award, explained the motive of Windmills as follows: »We looked at our salt pans and sought the knowledge that, with the help of wind and sun, finds a grain of salt in sea water, which improves a person's life without endangering nature. That is why a windmill from the salt pans is an ideal symbol of the efforts of the best among us." A more detailed reasoning of the winners of the Windmills of Excellence is available at HERE.

At the closing session, the achievements of the 6th Forum were summed up by Monika Kirbiš Rojs, State Secretary for Development and European Cohesion Policy, and Jean-Pierre Halkin, Head of the Macro-Regions Unit at the European Commission, who praised Slovenia's contribution in concretising aims and methods of work during the presidency and commended on record-high reach of the 6th Forum with 5.500 participants, including 2.000 from younger generations. 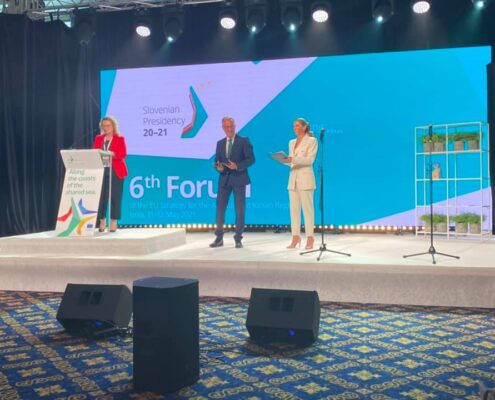 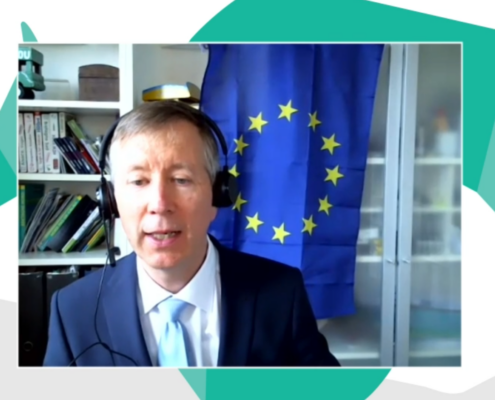 The forum was concluded with an exclusive performance in front of an almost thousand-strong online audience by cellist Luka Šulić, the Slovene half of the world-famous duo 2Cellos. 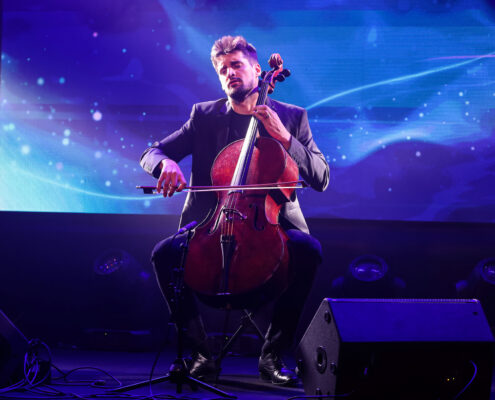 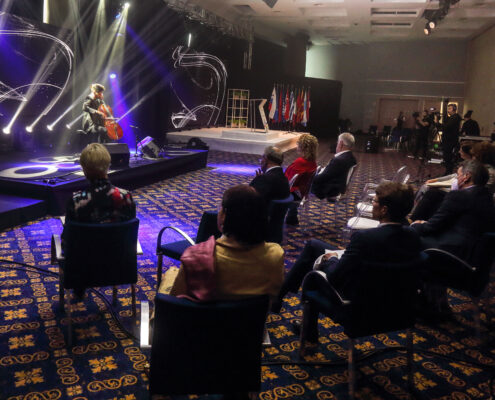