Sign up for our Newsletter
You are here: Home / News / Working draft of the first maritime spatial plan of Slovenia unveiled!
Print

IZOLA, 18 September – Mediterranean Coast and Macro-regional Strategies Week was packed with events this week. EUSAIR pillar coordinators technical meeting, EUSAIR national coordinators meeting and Adriatic and Ionian Initiative senior officials meeting were all held on Wednesday. EUSAIR Governing Board meeting followed on Thursday. Today’s agenda of the international two-week event was more appealing to the general public. The presentation of the working draft of Slovenia’s first maritime spatial plan and the debate on the impact of sea and water level rise, including the placement of high water marks in two Slovenian coastal towns, did not leave the audience disappointed.

A number of participants, including high-level experts on maritime spatial planning, gathered in the morning in Izola to see the progress made to the working draft of Slovenia’s first maritime spatial plan. Mag. Andreja Jerina from Slovenian Ministry of Foreign Affairs and Slovenian national coordinator of the three macro-regional strategies gave some introductory remarks, and was pleased to note that this initially modest event outgrew its original size in five years to become an internationally recognized event that put Slovenia on the European map. “The sea is what binds us together, it is the symbol of the Adriatic-Ionian region whose goal is to work together towards green recovery and strong resilience of Europe in the aftermath of COVID-19,” summed up Ms Jerina, highlighting a series of debates and side events packed in a two-week agenda of this year’s edition of the Mediterranean Coast and Macro-regional Strategies Week.

Cooperation with EUSAIR partners is imperative

“It all comes down to now or never for us to be finally able to stop the negative trend of limited marine and coastal resources available to us,” was openly adamant dr Mitja Bricelj from the Ministry of the Environment and Spatial Planning. Dr Bricelj was certain that for the first time in its history, Slovenia had a clear vision on sustainable management of natural resources of the Adriatic Sea that the country shares with its neighbours. “Now, the successful delivery of a strategic plan like our future maritime spatial plan will greatly depend on whether we get on board our EUSAIR partners and work together,” added dr Bricelj.

The goal of the first maritime spatial plan of Slovenia, a work in progress, is to foster sustainable growth of maritime economies and maritime areas and ensure sustainable use of marine resources. In other words: the document tries to strike balance or ensure harmony between the growth of economic activities, the use of the sea and the coast as well as the sea and coast regimes in place. The legal basis for the document is Directive 2014/89/EU and the national spatial planning act. Besides maritime affairs and fisheries, the document also addresses a range of other sea-related activities, including mariculture, nature protection and cultural heritage conservation. “We are working on aligning the document with the relevant national and European documents, and making sure that integrated planning of certain human activities both on land and at sea is properly done”, commented on the intertwining of formal frameworks and contents Valentina Lavrenčič, secretary from the Environment Directorate at the Ministry of the Environment and Spatial Planning.

“Maritime spatial plan foresees a 150-meter wide so-called coastal belt and, some 100-meter wide inland belt, whose width will be defined in detail later by the local communities”, said a member of the group of drafters Blaž Repe from the Department of Geography at the Faculty of Arts in Ljubljana. Sabina Capuš outlined the findings of the draft environmental report which is to be finalized by the launch of a public debate.

“The public debate will be launched in the end of October or the beginning of November, depending on how soon we get green light for the environmental report from the Ministry of the Environment and Spatial Planning”, said Lenča Humerca Šolar, head of the Strategic Spatial Development Division at the Ministry of the Environment and Spatial Planning. The document is to be submitted to the government, which is to discuss and adopt it by the end of the year. Time is running out for Slovenia, as the European Commission is expecting to receive the document by the end of March next year. 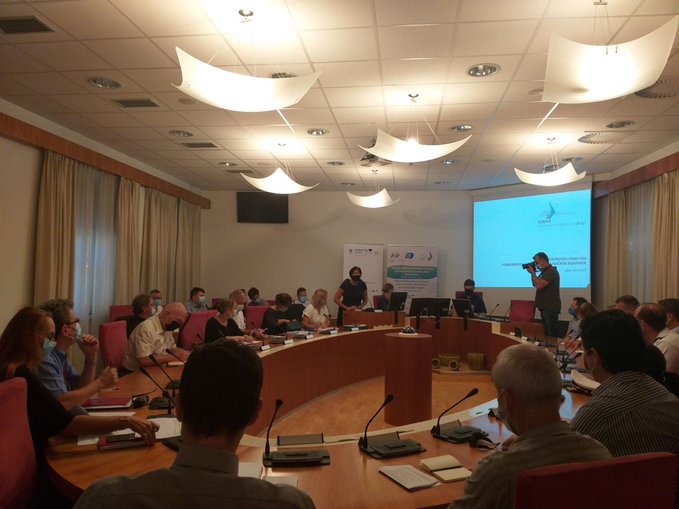 The working draft of the environmental report identified development activities with potential adverse consequences for the marine environment, such as the proposed construction of an artificial island in the Izola bay, removal of marine sediments from the Port of Koper and marinas and their deposition elsewhere, and extension of coast at Semedela and Žusterna etc. A special section of the environmental report will address prevention and emergency management of maritime accidents and measures taken to reduce and control marine pollution as a result of maritime accidents.

The debate participants contributed several proposals. Žarko Pregelj from the Ministry of Infrastructure warned of risks associated with huge volumes of oil transshipped in the port of Trieste and of the impact of the turbulence generated by ship engines and passage of ships on the seabed. Jadran Klinec, director of Slovenian Maritime Administration called on drafters to recognize the need for a systematic and joint cross-border control and management of ships’ ballast water.

Peter Vidmar, dean of the Faculty of Maritime Studies and Transport in Portorož reminded that shipyards (under the responsibility of the state and not of local communities) were the indispensable element of maritime economy and as such deserved to be addressed in the maritime spatial plan. He further proposed that several already made studies on this issue be used for a proper assessment of the situation. Another aspect was underlined by Robert Turk from the Piran local unit of the Institute of the Republic of Slovenia for Nature Conservation who said that ”the relevant EU directive provides for constant improvement to the vulnerable marine environment, while Slovenia has only really protected 2 percent of its sea”.

Youth, water and EUSAIR was a side event organized by the Slovenian Environment Agency in partnership with the local community. Children from primary and secondary schools in Koper and Piran and their mentors, teachers of Geography, showcased the impact of sea and water on selected sites. The awareness raising programme called “Climate change education for climate change adaptation” also marked an international conference of teachers “Climate change” in Štanjel, which was carried out by the Slovenian Geography Teachers’ Association in partnership with the Ministry of the Environment and Spatial Planning.

Residents of coastal towns are frequently faced with adverse impact of dynamics of sea and water, usually in the form of flooding of coastal areas. By placing high water marks that show the highest levels reached by the sea during floods, young people from Koper and Piran wished to draw attention to likely future adverse effects of sea and water if communities do not join forces to act in a preventive and active manner and build flood resilience. Izola, another Slovenian coastal town already has a high water mark placed in the backyard of Rex Gallery.

The second week of the Mediterranean Coast and Macro-regional Strategies Week will have the following events in store: two-day online workshop on the opportunities of the Green Deal for macro-regions organized in the scope of EUSAIR Pillar 3 (Environmental Quality), which is coordinated by Slovenia and Bosnia and Herzegovina. Another interesting side event will take place at the Biotechnical Faculty in Ljubljana – Final conference for the project LIFEGENMON “Forest science for future forests”.